Modern Thanksgiving has its direct origins in 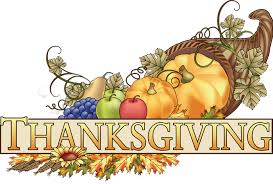 history. A group of Puritans fleeing religious persecution in England moved to the New World. On Sept. 6, 1620, they set sail on a ship called the Mayflower, arriving in the New World after 65 days.

They settled in a town called Plymouth in what is now Massachusetts.

The Pilgrims’ first winter was so harsh that fewer than 50 of the group survived the season.

On March 16, 1621, an Abnaki Indian named Samoset entered the Plymouth settlement. He welcomed the Pilgrims in English, and the next day returned with another American Indian named Squanto, who spoke English well. With Squanto’s help, the Pilgrims were able to survive in the New World.The harvest was very successful, due in large part to help from the American Indians. The Pilgrims had enough food for the winter and had learned how to survive in the New World.

Plymouth Colony’s Governor, decided to throw a celebratory feast and invited the colony’s American Indian neighbors to take part. The American Indians brought food as well, and the celebration lasted for three days. That 1621 celebration is remembered as the “First Thanksgiving in Plymouth.

Printables: Click, print and colour. If you want, bring it to class! 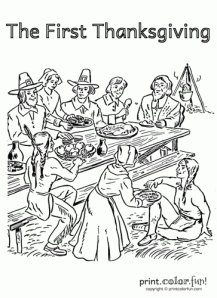 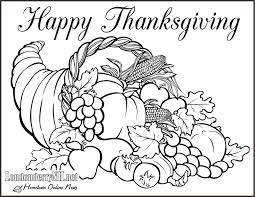